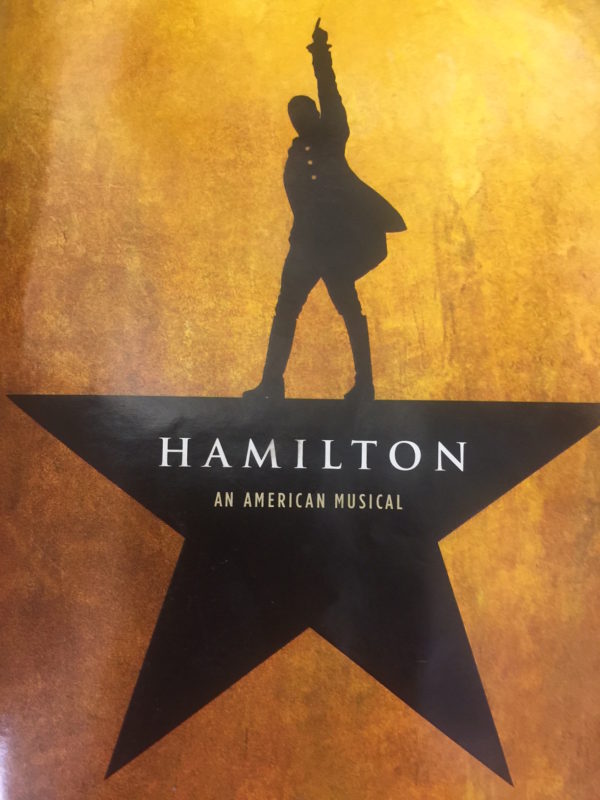 Back in January I bought tickets to go see Hamilton on Broadway, purposefully the Friday before the Presidential election.  I hoped we would be on the verge of electing our first female president.  I thought going to see the show would be a tribute to how far our country has come.  After all, what better way to celebrate the milestone than with a history-making AND historical show about the founding of our country – told via infectious hip-hop by a Latino and African American cast.  An incredible reminder of the sacrifices made, and compromises made, to get our democracy to where it is today.

I could not have predicted the painful 11 months of campaigning that would ensue after I bought those tickets.  But as I watched the show Friday night, I had deep comfort in knowing that this country was on the brink many times before, where democracy and ideals were questioned.  As I sat there tapping my toes, I marveled at how democracy has been, from its very inception, messy and imperfect.  The story is timely and timeless – and so many of the lyrics stood out as truths that are so poignant (and self-evident!) on the eve of this historical election…

“I have never agreed with Jefferson once. We have fought on like seventy-five different fronts. But when all is said and all is done, Jefferson has beliefs. Burr has none.” —Hamilton, “The Election of 1800”

I’ve been a Hilary Clinton supporter for many years, after not having a strong opinion of her time as First Lady.  I first met her serving on a Women’s Access to Capital committee for the State Department when she was Secretary of State.  We met again when we were both speakers at the ASEAN Enterpreneurship Summit in Bali (I know, life can be tough!).  And again many times during this campaign.  I was rooting her on when she first announced her candidacy on Roosevelt Island in front of thousands of people, and have been to rallies when she was lagging behind in the polls and rooms were harder to fill.  Times she looked tired, and times when she was energized.  Every time I’ve interacted with her, I’ve come away truly believing she is committed to this country, to equality and to a better world.  I have seen it in her eyes, her words and her actions.  She’s had a track record of standing up for what she believes in, and I believe that she stands for something larger than herself.

“We push away what we can never understand. We push away the unimaginable”- Angelica Schuyler, “Quiet Uptown”

As much as I’ve supported Hillary Clinton, I have also been bothered by the vitriol on both sides.  The unwillingness to see how decent people could decide to vote for the other candidate.  This absence of empathy has been the most disappointing part of the election to me.  I went back to the small town in New Jersey that I grew up in a few weekends ago. There were many Trump/Pence signs and not one Clinton/Kaine sign.  I refuse to think that the people living in these houses are horrible people.  I know many of them are highly educated. Yesterday, I watched a CNN interview with a woman who is a Trump supporter, who was crying as she’s been accused of being a bad mother just because of her political beliefs.  When did it come to this? Whatever the outcome, many different points of view exist in this country and we cannot ignore that a functioning democracy allows those viewpoints to exist.

All of us have to stop pushing away what we don’t understand, and it’s not easy.  If the other side doesn’t want to hear you out, that doesn’t mean we react with hatred or judgement. As Gandhi said “an eye for an eye only makes the whole world blind”.

“I may not live to see our glory, but I will gladly join the fight. And when our children tell our story, they’ll tell the story of tonight.” —Hamilton, “The Story of Tonight”

About six months ago, I showed my (3 year old ) niece and (5 year old) nephew a video I had taken of Hillary Clinton at one of her rallies.  They asked who she was and what she was saying.  I explained to them she was running for President, and that she may be the first woman president of the United States.

I get goosebumps thinking that, after 200+ years of existence, the United States may have its first female president.  That little girls and boys will grow up seeing a woman in the Oval Office and consider it normal.  I smiled when Secretary Clinton guaranteed at the last debate that she would be the youngest and healthiest female president to date.  I remember writing to Prime Minister Indira Gandhi in 1982 – telling her it meant so much to me, as a young Indian girl, to see her in charge of India.  I went on to write that I was upset with my parents for moving to the United States after I was born, as that meant that I couldn’t be President of the United States.   But as the years went on, and I to slogged it out in the male dominated worlds of Wall Street and Silicon Valley, I saw firsthand the misogyny – often not intentional but a product of our society – and double standards that made me feel that I had to work (at least) twice as hard, and toe many lines to even stay in the game.  Let alone even think about running for President.

As Hillary Clinton has had to deal with questions of whether she’s speaking too loud (or with the right tone), or what she looks like, or criticized for overpreparing for the debates – so many women I know (including me) view her experience as the story of their lives. And as we’ve watched Trump, with his bravado and sense of entitlement in his business and personal lives, we’ve been reminded of the men with similar attitudes that we’ve had to battle.  It happens way more than most men realize.

A Harvard Business Review article published in October entitled Why Aren’t Women Making It to the Top of Financial Services Firms documents some of these challenges:

Even our definition of leadership often follows stereotypical male characteristics. As a result, ‘we end up having to ‘masculinize’ our female traits,’ one younger banker said.

The result is that women are implicitly held to a higher standard than their male colleagues. Proving yourself is harder for women. This helps to explain the very high quality of senior women in financial services; as one of our interviewees observed, ‘Some of the men at the top are extraordinary, but all of the women are.’ As one senior woman we interviewed explained, ‘Firms are more willing to take risks on men. With a woman, she has to prove it first.’ Consequently, many women lose confidence that they can succeed, and lower their ambitions or quit.

No, I’m not voting for her because she’s a woman.  But this election has brought to light the double standards that exist for women and hopefully will be the beginning of real change.  As painful as Trump’s comments have been to see, maybe it took such blatant and crass words to expose what’s a reality for way too many women.   These attitudes know no socio-economic divide and vary from believing women should do most of the housework, to promoting men over women (as traditionally they’ve been considered primary breadwinners), to believing women’s bodies are men’s property.

“We’re finally on the field, we’ve had quite a run. Immigrants: we get the job done.” —Hamilton and Lafayette, “Yorktown”

Immigrants take our jobs. They don’t pay taxes. They’re a drain on the economy. They make America less … American.

You’ve probably heard all of these arguments, especially with the country recovering from a financial disaster. Indeed, they’ve been heard for a century or two, as successive waves of immigrants to this nation of immigrants have first been vilified, then grudgingly tolerated, and ultimately venerated for their contributions.

This time, too, there is ample evidence that immigrants are creating businesses and revitalizing the U.S. workforce. From 2006 to 2012, more than two-fifths of the start-up tech companies in Silicon Valley had at least one foreign-born founder, according to the Kauffman Foundation. A report by the Partnership for a New American Economy, which advocates for immigrants in the U.S. workforce, found that they accounted for 28 percent of all new small businesses in 2011.

The United States has been a nation of immigrants.  I’ve written on the topic many times on my blog and have been a vocal advocate of immigration reform.  As pointed out above, this country has created opportunity for immigrants, and they have responded by giving back in spades since the country’s founding.

We’re also seeing huge demographic shifts in our electorate, which going to be a large factor in this election if voter participation is high.  According to the Pew Research Center:

Reports show that Clinton is ahead in early voting in Nevada and Florida, as Hispanics are turning up to the polls in record numbers to support her.  The anti-immigration and racist rhetoric from Trump has inspired this unprecedented voter turnout.  The numbers show that the tide of history is against any candidate appealing solely to America’s “traditional” base.

“America, you great unfinished symphony, you sent for me. You let me make a difference. A place where even orphan immigrants can leave their fingerprints and rise up.” – Hamilton, The World Was Wide Enough

I look forward to Wednesday morning.  As much as I’m glad the election is almost over, I am thankful that the process, as painful as it has been, exposed the challenges that exist in our changing country.  Without exposing these challenges, we can’t begin to address them.  A lot of people are worried that their way of life is slipping away.  I believe this country can be better for everyone in the 21st century than the 20th  century – but I’m also cognizant I’m part of the change, and one of the many voices that are finally being heard.  And regardless of the outcome, I look forward to continuing to work on our imperfect democracy.

“I feel so fortunate to be alive, and in my prime, at this point in time.” – Jalak Jobanputra, “The Barefoot VC”