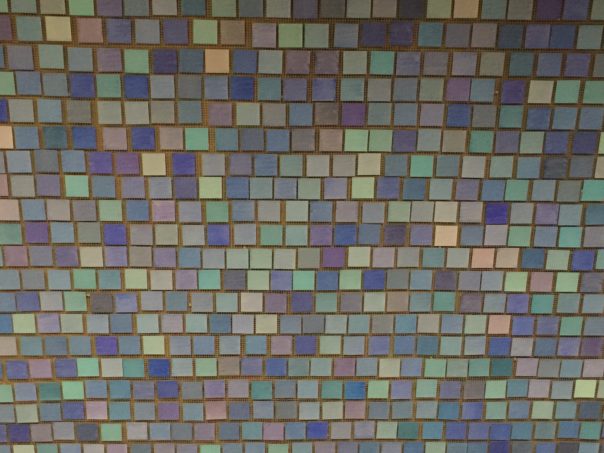 On this 15th anniversary of the 9/11 attacks, I am particularly aware of the march of time and how, as each year passes, those who study it or learn about it outnumber those that experienced that day.  The picture I posted with this blog post is one I took at the 9/11 Museum – a mosaic of people’s remembrance of the color of the sky that day.

Today I walked over to the firehouse near my office, Ladder 20, on Lafayette Street. They had opened it up to the public and were hosting breakfast/brunch. Firefighters from the memorial service were just starting to make their way back. It was a somber, but hopeful, scene. So many young children were there, fascinated by the fire engines and uniforms. There was so much life and laughter in there, so different from the chaos 15 years ago.

When I visited the 9/11 Museum for the first time with my parents a few months ago, it was incredibly emotional seeing the half melted firetrucks on display. I thought of those first responders, who marched right into the thick of the scene, knowing that they were most likely not going to return. The most striking part of the visit was listening to voicemails of so many who didn’t survive…you could hear the anguish in their voices. And voicemails of those trying to reach some of the first responders, at first hopeful, and then frantic as the day went on. The closest experience I’ve had to this is at the Genocide Memorial in Kigali, Rwanda, which interviewed survivors – you hear their voices as you walk through rooms showing pictures of the victims (many of them children).

Like many of us living in NYC, I have very personal stories of 9/11. I trained for my first investment banking job in the twin towers, and walked through them every day on my way to work at the World Financial Center in the mid-1990s. I had countless business dinners at Windows on the World. In the weeks leading up to 9/11, when I was working at Intel Capital in Silicon Valley, I was back on the east coast traveling with my family in the Berkshires and then had a meeting with a portfolio company that was headquartered in the World Trade Center. I was scheduled to fly back from Newark to San Francisco on 9/11 but decided to move the trip to a day earlier. In those days, you could get to the airport 15-20 minutes before your flight left and still make it. I traveled a lot then but it’s hard for me to remember exactly how it was flying then– as it is so different today.

So I was in my bed in San Francisco, recovering from all the recent travel when my phone (yes we had landlines back then) starting ringing off the hook at 7AM. No one left messages. I kept ignoring the ringing until I finally picked up. One of my best friends, who had worked with me in the World Financial Center, was crying. She told me to turn on the TV as she could barely speak. She, like I, had moved to San Francisco but had many ties back to NYC. Then I called my mom, who lived in New Jersey, and she was in tears and with my aunt. My uncle was an engineer at the Port Authority and his office was in one of the towers. No one had heard from him. I tried calling my boyfriend at the time, who split his time between NYC and Boston, and was scheduled to fly to Boston that day. I tried reaching my portfolio company CEO, to no avail.

I called into work to let them know I wasn’t going to come in – I couldn’t imagine trying to drive my car down to Santa Clara that day (although most people did go to work in SF that day, a surreal experience that made me acutely aware of the distance – geographically and otherwise – that exist in this country). I met up with friends later, a similar scene to so many around the world, trying to make sense of that day.

Eventually we heard from my uncle, he had gotten to the towers just as the second one was hit and had to turn around, running for his life. Most of his floor did not survive. My boyfriend was on a plane at LaGuardia on his way to Boston, and was on the tarmac as all of this transpired. Miraculously everyone at the portfolio company survived, but the company did not survive the trauma of the event. Later on, I heard countless stories of people I had known who didn’t make it, and others who had survived and left NYC soon after.

The first time I flew back into NYC and looked at the skyline as we were landing, I was in tears. I remembered all the flights I had been on where tourists (or new immigrants) excitedly pointed out the skyline, and particularly the twin yowers. They were a symbol of freedom and opportunity. The hole seemed so obvious as I looked out of that plane window.

I moved back to NYC in 2004. I am constantly amazed and inspired by the resilience of this city, and the renaissance downtown has experienced. I was honored to serve as an advisor to the Downtown Alliance as they rolled out Lower Manhattan HQ, 12,500 square feet of prime real estate dedicated to creating community for the new influx of diverse companies. And when I land in NYC these days, I see the Freedom Tower, rising stronger than ever, and am so proud to call this city home, and feel privileged to interact with the very people who literally rebuilt this city. But I will never forget a key lesson that 9/11 reinforced, when I had so many close encounters with death that day.  So much of our lives is luck of the draw, and it is up to us to maximize each day, as we surely don’t know what tomorrow will bring.