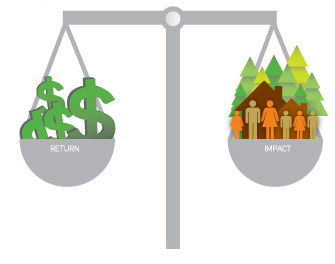 Impact investing, venture philanthropy and social entrepreneurship are all areas in practice and theory that have been close to my heart for years. As regular readers of my blog know, I was born in Nairobi and grew up visiting the developing world in the 1980s, after my family moved to the United States.

If I had to choose one moment that changed my life, it was when my parents took my brother and me to my dad’s ancestral village in 1982. A budding poet at the age of 10, I had filled my diary with poems of gold palaces, handsome princes and beautiful silks on the long plan ride from New York to Bombay…only to be greeted at 2 AM by a chaotic scene of humanity (and stray animals) in the humid air – the airport was not even enclosed. I burst into tears and demanded to be taken back to the comfort of our suburban home in New Jersey (I can’t even imagine my exhausted parents’ dread of the upcoming month of travel with that attitude in tow). My parents, who were both born and raised in different parts of Tanzania, were determined to show us the material poverty (and outsized generosity) of people on our first trip to India. After acclimating to Bombay by staying with relatives in houses without plumbing, lots of mosquitoes and with strange smells everywhere, we drove for what seemed like days through unpaved roads to my dad’s ancestral village. Once there, we stayed in a hut, where the entire extended family cooked, ate and slept. At first horrified by the conditions, I grew to appreciate the closeness and warmth within that hut. When we left, I expected them to ask their distant American relatives for money (or perhaps a pen or the melted chocolate bars we carried with us). But they had no need for those items – they had everything they wanted, with the exception of…batteries. Batteries for their radio. The radio that connected them to the world. The radio that allowed them to imagine a world and stories well beyond their hut and barren countryside. A world that they would likely never see but nonetheless that they felt a part of.

Luckily we did have batteries with us and gave them what we had. Years later, when it came time for me to apply to college and explain what I wanted to do with the rest of my life, I wrote about that story on my typewriter, over and over again. I knew I wanted to work in media, so that I could create stories that would connect people and capture their imaginations, about a world beyond their borders, whether it was a hut or a city or a country (if they were fortunate enough to travel). At the time I couldn’t even imagine an Internet – that would have been more fantastical than the science fiction that was my genre of choice. I wrote about the power of the word, spoken or written, and how it could potentially aid in development and education in these developing countries.

After taking an economics class in college which sparked my interest in business, I changed my focus to a dual degree in finance and communications, with the goal of combining capitalism with media to make an impact on the world. This was a strange concept to my Wharton undergrad classmates in the early 1990’s so I mainly kept these lofty goals to myself as I learned the skills I thought I would need. While I volunteered with nonprofits I rarely saw the opportunity to combine these skills until I heard about social entrepreneurship and impact investing.

While these labels once served a purpose I now feel that these labels are serving as constraints instead of opportunities. After investing in technology for over 20 years, I have never believed more strongly in the transformative power of connectivity. Through mobile access to information and creation, people far from Silicon Valley now can be active participants in the world economy. I believe the best is yet to come in terms of harnessing this talent, but this can only happen if we can provide enough capital and resources to the most promising entrepreneurs and understand that the best applications and services are those that are fulfilling a “must have” – a need, a pain point that can’t be solved in a different way, by definition often in an underserved market. VC’s like to say that the best entrepreneurs are the ones that have intimately experienced the problem they are solving. It would follow that much future innovation will come from those that we currently call “social entrepreneurs” and funded (often in lesser amounts that they actually need) by “impact investors”, or given program grants by foundations. Often these entrepreneurs also create mission driven, inclusive company cultures that can recruit and retain loyal talent, in contrast to the fluid job market in Silicon Valley where employees often leave after their stock options vest. The hidden cost of this (and employee burnout) is one that any investor is all too familiar with.

I’d like to see a world in which these talented founders are simply entrepreneurs funded by investors who understand the outsize (social AND financial) returns that will result from investing in them. Then “impact investing” will have truly arrived.