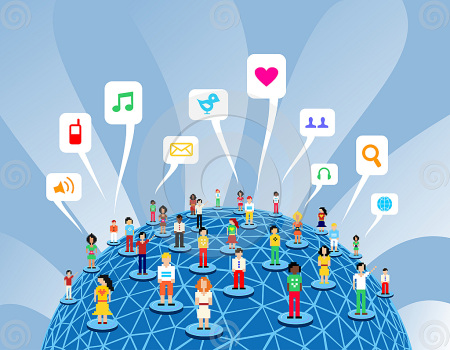 As an avid traveler, observer of the world and a technophile, I’ve been struck by the parallels in the development of technology with the broader evolution of societal structures. These observations have led me to the investment thesis at the core of Future\Perfect Ventures. We’re investing in decentralization as a theme – including new infrastructure models that are emerging (such as the blockchain and wireless mesh networks) as well as smart data applications that can utilize this new infrastructure.

Most of the 20th century brought the world highly centralized world orders: the Industrial Revolution in which factory workers reported to management in hierarchical structures, and wars that created nationalist movements. Computing was centralized to one computer.

Towards the end of the 20th century, we began to see movement towards more distributed networks. Interconnected hub and spoke models began to replace top-down structures. Cities gained more autonomy and decision making powers, particularly post-Cold War. In technology, the emergence of the commercial Internet and web servers allowed information to be distributed via the Hypertext Transfer Protocol (HTTP) – an application protocol that utilizes links between nodes for distributed and collaborative information systems. We also began to see more distributed server networks including grid computing (the use of several computers in a network to solve one problem simultaneously) and virtualization which helped mitigate risk in the event of central failure.

In the 21st century, we are moving quickly into an age of decentralization. We’ve seen the breakdown of nations and the emergence of ideologies across geographic boundaries. Mobile networks have enabled individuals to connect to each other in real time and across borders, supplying each of them with more information and connectivity than ever before. We’ve seen peer to peer networks connect people in lending, media and other industries, as well as the emergence of collaborative consumption and the sharing economy. While computers share resources, individuals now connect directly with each other to share their own resources. These networks have balanced the power of individuals with the institutions that have traditionally been the sole gatekeepers of information, transactions, and decision making.

At the technology layer, peers make a portion of their resources available to other network participants without the need for central coordination. Peers are both suppliers and consumers of resources (in contrast to the traditional client/server model that emerged in the distributed age, in which the consumption and supply of resources is divided). Further, emerging collaborative P2P systems are going beyond the era of peers doing similar things while sharing resources, and are looking for diverse peers that can bring in unique resources and capabilities to a virtual community thereby empowering it to engage in greater tasks beyond those that can be accomplished by individual peers, yet that are beneficial to all the peers. (Bandara, H. M. N. D; A. P. Jayasumana 2012).

Now we get to why diversity and intelligence is needed at the peer level. In order to have the highest functioning network, each individual node should be optimized. These nodes include humans as well as the billions of machines that will be connected in this global cloud. This is why we are moving beyond the “artificial” intelligence of the 20th century, and cognitive computing and machine learning technologies are emerging as key to our futures. Smart data applications will develop to create more intelligence at these nodes so all of us will function better – whether it is making decisions about our health (and that of the collective network’s), personalized learning platforms, or financial solutions that take into account individual or community needs. A recent IDC report predicted that by 2018 half of all consumers will interact with services based on cognitive computing on a regular basis.

This new collective intelligence will allow each node to contribute in a highly personal way. Technology will empower these nodes, automating much of what we spend energy doing and I’d argue, enable us to become MORE human, and contribute more to the world’s emerging decentralized mesh, to solve even greater problems, all the while optimizing our own environments. What’s key here? The participation of EVERYONE, of all genders, of all races, in all corners of the world, for the most optimal and efficient global network. It’s not only about the algorithm, it’s about what the algorithm collectively allows us, and our hearts and minds, to do.

FPV has backed several entrepreneurs who are at the forefront of this decentralized movement, at both the application level as well as the infrastructure layer, including Open Garden (a wireless mesh network and creator of Firechat), Blockstream (expanding the blockchain to allow more robust development on the network), Bitpesa (connecting Africans to the blockchain) and VirtualU (3D body scanner and software that analyzes and benchmarks an individual’s health patterns). We are looking forward to funding many more entrepreneurs that are thinking creatively (and responsibly) about this future, a future in which our created technology truly starts working for us as individuals and the planet as a whole.

3 Replies to “Smart Data, Diversity and our Decentralized Future”