What the Elephant God Can Teach Tech Entrepreneurs 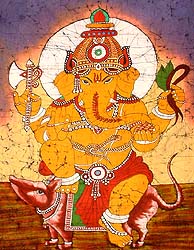 This weekend I was at a family celebration in New Jersey and spent some time with an uncle who is a chemical engineer by training but also well versed in the Vedas, the ancient Hindu scriptures. So well versed that he is in high demand throughout the world performing weddings and other Hindu ceromonies in his retirement, giving any donations from his activities to charity. We talked about the curiousity and symbolism around Ganesha, most well known as the Elephant God. Countless friends of mine come back from India with a Ganesha statue made of rosewood, marble or sandlewood, and know that he is known as a symbol of good luck and remover of obstacles. He is invoked at the beginning of any new endeavor amongst Hindus worldwide — at weddings, baby showers, the purchase of a new car or the start of a new fiscal year. Hindu texts tell the story of how his unique form came into being:

One story relates that Ganesh’s mother, Parvati, had to go for her bath when her husband, Shiva, was not at home. As Shiva had gone on a meditation retreat and was not expected to return, Parvati ordered Ganesh to keep guard and not let anyone inside the room. But after a while Shiva arrived and when he tried to enter, the child refused to let him do so. This angered Shiva, who did not recognize his son and cut off the Ganesh’s head.
In order to make up for his mistake, Shiva promised Parvati that if she places the head of any person or thing which crosses her path early the next day, the Ganesh would come back to life. The first person or thing that passed by them was the mighty elephant. Shiva cut off its head and placed it on the torso of the beheaded child.

But as in the case with all of Hinduism, there is great symbolism in the Ganesha form. Ganesha the word comes from Gana which means “flock, multitude” in Sanskrit and Isha which translates into Supreme. So Ganesha, with his elephant head, represents a leader for the masses. As my uncle walked through the meaning behind the form, I thought of how we can all benefit from these attributes:

Large Head: No, this does not mean arrogance! It signifies the importance of knowledge. No matter how much you know there is a lot more knowledge to acquire. The most brilliant and gifted people in this world are lifelong learners. This is also how business models also evolve. I see more entrepreneurs today than before and a higher velocity of technology innovation. It is more important than ever to use cross discliplinary approaches to solve problems and arrive at answers faster. Technology usage is no longer on the fringe, it is part of most people’s daily life, be it in India, Russia, Abu Dhabhi or Silicon Valley. Thus if you are a tech entrepreneur it is imperative that you understand the world around you, the (sometimes fickle) consumers/businesses and their psyche, and how they are evolving so that you can evolve with them.

Large Flapping Ears: Last year when I was in Rwanda I wrote a post on the importance of listening. Large ears signify listening capacity. If you don’t have a (large) ear to the ground, you will miss out on your customers’ needs or your competitors’ moves. This is why a good advisory board and board of directors is key to a success of a business. I always say an entrepeneur can’t do it alone — think carefully of who you can surround yourself that will serve as ears to the ground. But there’s also a lot of distracting noise in our environment. Flapping ears mean that you have the ability to swat away any insects that may surround you, dismiss those voices buzzing in your ear that are not helpful and are distracting from your goals. As an entrepreneur, particularly one who is doing something groundbreaking and innovative (the kind I want to invest in), you will come across naysayers and people who just don’t get it. Successful entrepreneurs know who to listen to and who are the insects…which leads to…

Thick Skin: This is self-explanatory. Most people find it easier to say no than yes, to criticize than embrace. Don’t take it personally and move on.

Small Eyes: Focus, focus, focus. When we are concentrating our eyes narrow. When we are taken by surprise our eyes widen. Focus is key to successful execution and is why visionary founders with great ideas are often paired with more operational leaders. This is also why it is important to get one product or service right, in one market, and then expand from there. You’ll have referenceable users and domain expertise to build upon. And don’t be taken by surprise (but if you have your ears to the ground you won’t be…)

Large Stomach: There’s value in taking in information and allowing it to sit and digest. Not everything useful you are exposed to will be useful right away but don’t be so quick to dismiss it. File it away and it may come back in a different form or in the same form at a more relevant point in time. This is true with people too. If you come across people that are bright and impressive, keep in touch with them. I can’t even count how many times I’ve ended up doing business with people I first met years ago and kept in my network.

Trunk: We all know the story of the mighty elephant trunk being flexible and controlled enough to pick up a peanut. You want to be that elephant trunk. Be strong, but nimble, especially as your company grows. It is too easy to get unwieldy with growth. Last week, I was honored to be named in the Top 50 Asian Americans in Business, with Tony Hsieh, CEO of Zappos, as the chief honoree. He just wrote a book, Delivering Happiness, and spoke of the importance of establishing company culture, vision, and values early on. Put in systems and policies to support these early, before you may need them, as rapid growth (overall a good problem to have) can overtake small companies very quickly. The companies that maintain a core set of values and, most importantly, employees who embody those values, are best able to survive that rapid growth. Build a strong company from within, and ideally one that has mechanisms that empower employees to stay responsive to the market.

9 Replies to “What the Elephant God Can Teach Tech Entrepreneurs”